Yesterday was one of those days when it is brilliant to work for an organisation like The Open University and see why it is at the leading edge of research. Here is my take on the 48 hours leading up to the landing of the Comet as seen from IT at the OU!

We’ve known something has been up for a long time (well over 10 years in fact) as the surest way to get a PC fault escalated fast is to tag “It will affect Rosetta” onto the ticket!. In fact my first interaction with Professor Monica Grady (You will have seen her on telly) was when we managed to cause a problem on the Science network as part of sorting out of legacy XP desktops!. I’m pleased to say after a “rocky” start, things are now much better. 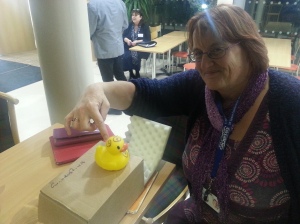 I went to a great seminar a few months ago to explain what the mission was all about and in particular where the probe would land. Basically the comet is duck shaped, and Monica showed me exactly where the landing site was.

On Tuesday things really started getting going with preparing to fire up the system. Apparently they had problems with getting it working properly so took the decision to turn it off and on again. It’s great to see that its not just our IT folks who provide that advice….or maybe they contacted the IT folks at the European Space Agency and that’s what they said too?! As Monica however pointed out, its a lot harder to do a reboot at 300 million miles – all we have to do in IT is to press CTRL-ALT-DEL!!

They then found out the thruster rocket on the roof that stops it bouncing off the comet surface would not work! I did see later on a tweet from William Shatner congratulating the team!! I hope he had tried to contact Scotty to see if he could get the thruster working – but clearly to no avail (“More thrust Scotty” – Star Trek).

Anyway a go decision was taken, and the descent to the surface started. Apparently a number of observers were watching the descent with interest, and the lander was able to send a picture back as it descended.

A large number of OU Staff were also gathered to watch the event live with some of the key members of the project keeping us up to date. We even had live links to our team at the Space Agency Control Centre. We saw some amazing images of the comet. 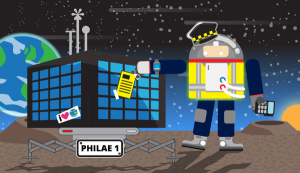 Apparently after the comet landed, it bounced and moved a bit – that was technical description. I’m not sure……I reckon some of our parking wardens in Macclesfield have been training folks on 67P.

Anyway, after it had all calmed down, apparently loads of people were still doing TV interviews. Now for my Mum, who is an active member of the U3A and WI, knowing people who are on TV (however tenuous the link!) is worth loads of brownie points. So I had to make sure that she understood who was who. Anyway we managed to get that sorted and my mum can now recognise and name Dr. Natalie Starkey, Professor Monica Grady and Professor Ian Wright.

To end on a serious note – what an achievement and it reminds us what a wonderful place the OU is. I’ll leave you with a quote from the director of the mission “The problem with success is that it looks easy” Perhaps that also applies in IT when we do things well.#tenuouslink

Update – here is a good summary of the mission on youtube  http://fb.me/1Luyijriz

One thought on “Putting a washing machine on a comet – It’s hard – last time I heard, I thought Comet had gone bust?”

This site uses Akismet to reduce spam. Learn how your comment data is processed.