My dad passed away  peacefully at home on Sunday 23rd November aged 77 with his wife and my mum Margret by his side.

Born in Hampstead, London, he spent his early life living in the south of France at Grasse where his mother Claire Pearce had met Paul Jacot, my Grandfather after being brought up by Alice Rothschild at Waddesdon Manor.

Guy met my mother whilst visiting a distant German cousin for an exchange and they were married in 1961.

Me on my Dad’s lap

I was born on his father’s farm at Shortridge, Kent, but my dad spent his career as an Agricultural Adviser and Consultant working in Nantwich, March, Cambridge and Northumberland.

Perhaps the most memorable part of our early life was 2 years working in Kenya in the early 1970s seconded by the British Government to help develop agriculture and farming. We had a fantastic time out there visiting many game reserves.

Another key part of our life growing up was music, sailing and a love of outdoor live –  opportunities given to me by my parents that I still love today.

On retirement, Guy and Margret moved back to Northumberland. They travelled extensively visiting, among other places Syria, Libya, China, Tibet, and organised many holidays for the U3A Travel Group often focusing on their love of history and architecture.Guy was also a regular guide and steward at Hexham Abbey.

In addition, they explored and walked the local area and looked after a section of Hadrian’s Wall which my mum still patrols and monitors regularly.

Guys other talent was woodworking. Whilst living in Cambridge he discovered evening classes in Musical Instrument Making. Eventually he made a violin, viola and cello – I still play the cello regularly and all three instruments were an important part of his funeral.

He was buried in Humshaugh churchyard near Hexham on 8th December 2014. The night before four of his family rang in a Quarter Peal in his memory at Hexham Abbey. He wanted the day to remember and celebrate his life and chose all the readings and music. He certainly would have been proud of his send-off. Our church warden, Roger, preached on the day Guy died said that remembering is far more than “not forgetting”; it is about creating a lasting memory.

Cannon Frank Dexter, a friend of Margret and Guy, preached about his many qualities, in particular his Gallic charm and welcoming nature that touched so many people’s lives. His sermon was based on Jesus’ last words in John’s gospel “his life is fulfilled”.

My younger brother,  Kevin, spoke movingly about all our memories of Guy – his love for Margret, his driving, his “illegal” purchases, and many more stories. This is his address. Kevin also talked about Guy’s talent for making musical instruments and how his violin, viola and cello will remain a visual and audible memory of Guy for many future generations. 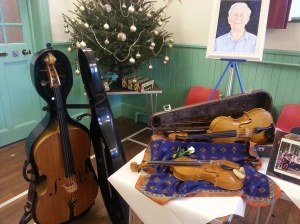 Music and readings played a key role on the day. Every item had been chosen by Guy; a special arrangement of “Climb every mountain” arranged by Kevin for solo viola as Guy’s coffin was carried into the church by Frank and Guy’s grandsons, an Aria by Mozart, Faure Après un Rêve, and the hymns and readings. This is the order of service.

We also recorded a couple of clips of us practicing in the church on Sunday which you may enjoy.

Guy was a loved Husband, Father, Grandfather and friend. May he rest in Peace.

This site uses Akismet to reduce spam. Learn how your comment data is processed.